Germany’s contribution to the 14th International Architecture Exhibition – la Biennale di Venezia, created by architects Alex Lehnerer and Savvas Ciriacidis, responds to Artistic Director Rem Koolhaas’ overarching theme, “Absorbing Modernity: 1914–2014,” by questioning representational architecture. Germany is looking back at a century full of political and social fractures and continuities, in which the nation repeatedly defined itself anew. In this context, BUNGALOW GERMANIA examines the tension between national identity and its built, architectural expression. It hereby not only understands architecture as a reflection of ideological power structures, but also as a constitutive force within existing societal circumstances.

Two buildings of national and historical importance anchor the project within the past century: the German Pavilion and the Kanzlerbungalow [Chancellor Bungalow] in Bonn, realized by Sep Ruf in 1964. The Kanzlerbungalow was ubiquitous in the West German media during the tenure of the Bonn Republic, and functioned as the “nation’s living room.” When the capital of the Federal Republic of Germany moved from Bonn to Berlin in 1999, the Kanzlerbungalow lost its visibility as an object and vanished into oblivion. These two buildings represent two eras of German history, two political systems, and two architectural languages. Both buildings were instrumentalized by their owners as a statement on nationhood or as a promise to the nation.

In Venice, the Pavilion and Bungalow enter into dialogue with each other through an architectural montage. A 1:1 partial replica of the Bungalow creates an accessible spatial installation in its cross-cutting with the architecture of the Pavilion. The instal-lation connects ideas, moments in time, actual places, and spaces. Here the Bungalow’s materials and elements function as media that transport past political gestures and symbolic actions from Bonn to Venice.

The situative conjunction of the two buildings forms a “third space,” which obscures the organization and character of the original spaces. One building thus becomes the key to the other. The Pavilion reads and references itself through the Bungalow, and vice versa, to create a dual legibility. This conversation opens up a spectrum of associations with the forms and uses of these architectures and the (German) history associated with them. 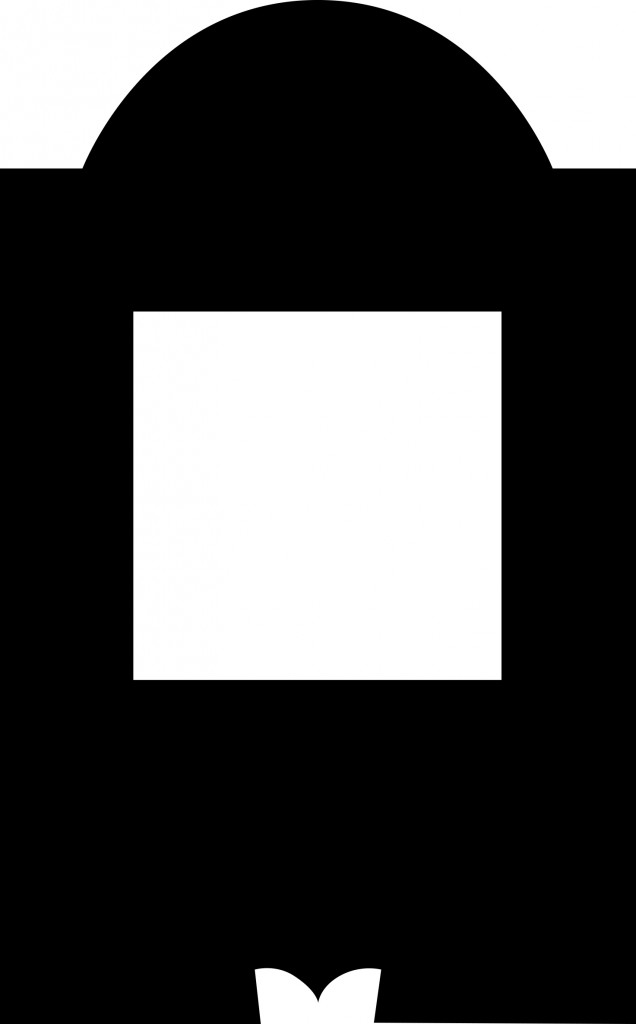 New floor plan figure of the central space of the pavilion. 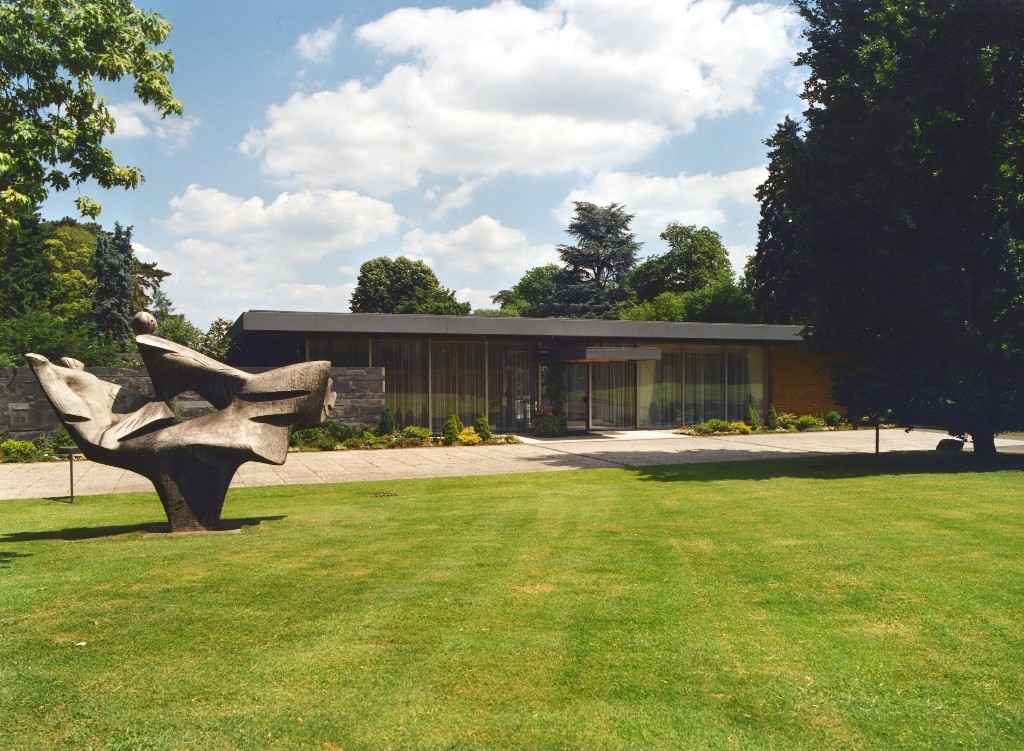 Within the park in Bonn, the former residence of the German Chancellor is revealed. In the foreground the sculpture "Figurenbaum" (1958) by Bernhard Heiliger.
Image credits: Ludwig Wegmann

Superimposition of the pavilion with the bungalow in elevation. 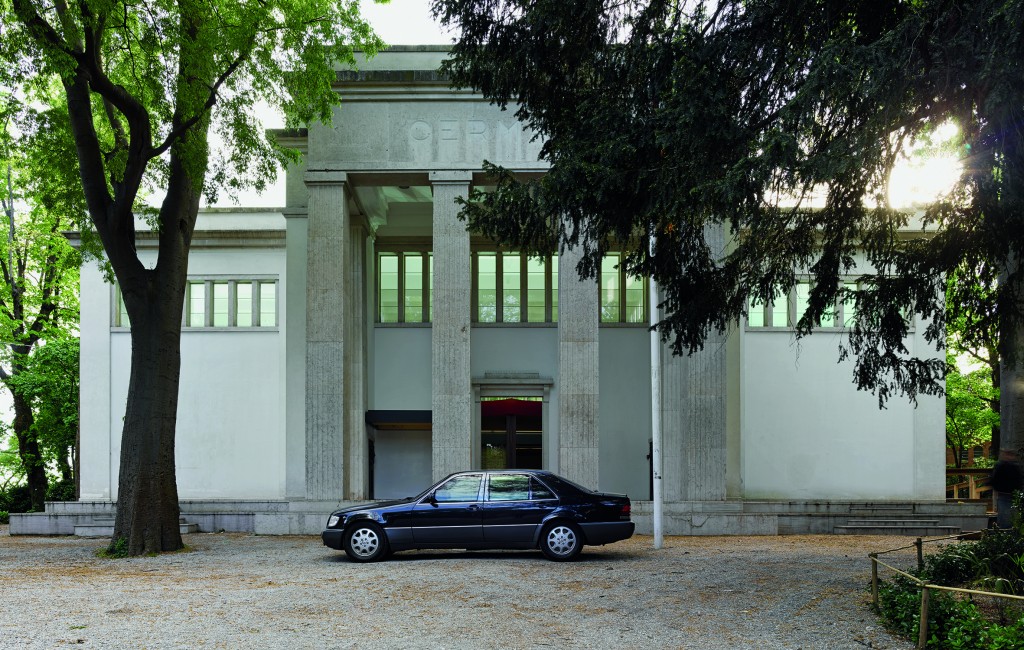 In front of the Pavilion in Venice.
Image credits: Bas Princen 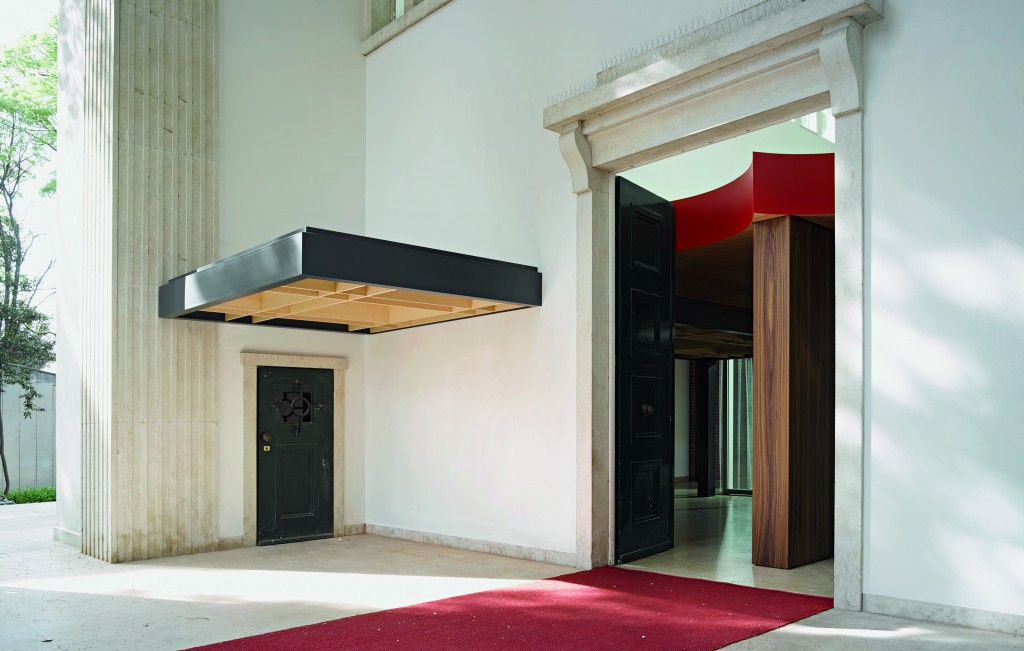